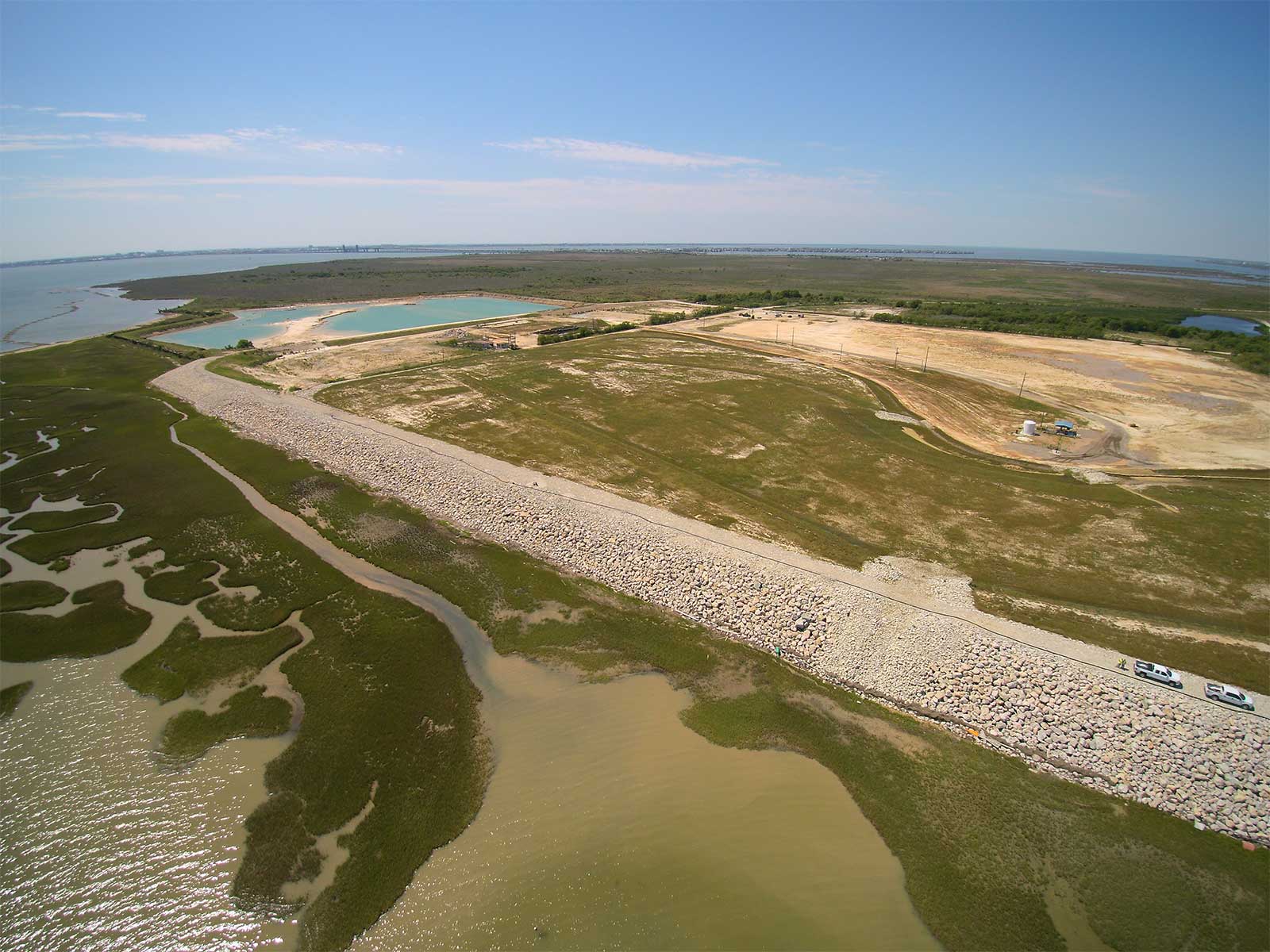 PNL has noted recent news about a mid-October 2019 GAO report titled EPA Should Take Additional Actions to Manage Risks from Climate Change. The report evaluated the potential for adverse climatic effects on Superfund sites in terms of flooding, storm surge, wildfires, and sea level rise. Each individual Superfund site in the US is evaluated and rated for its potential impact by location. Data included the FEMA National Flood Hazard Layer for flood hazards, the NOAA SLOSH Model for storm surge, a NOAA SLR Model for sea level rise and the U.S. Forest Service’s wildfire hazard potential map. PNL reviewed the report and we provide a brief summary.

The GAO Report recommendations include:

In the future, to address potential climate change issues for affected sites:

Article from The Washington Post: 60% of Superfund sites could be hit by climate change, new government report finds

For reference only: https://www.gao.gov/products/gao-20-73 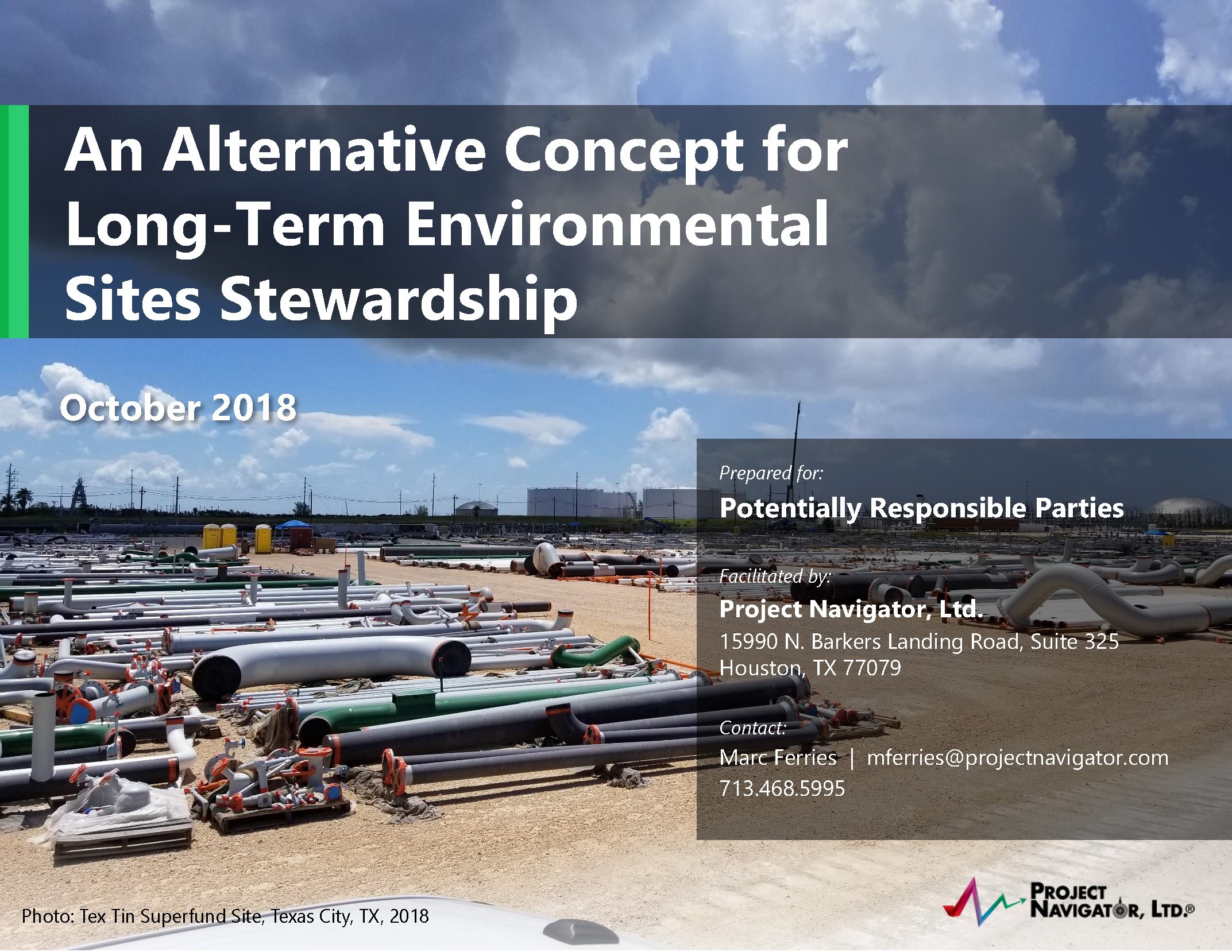 PNL has worked for PRPs managing environmental response actions at Gulf Coast CERCLA sites since the company’s founding 21 years ago. Major, complex CERCLA remediation programs under PNL’s direction, such as Malone, Tex Tin and PAB Oil & Chemical have run from their early RI/FS stages, to RODs, to RD/RAs and now into their respective long-term OM&M phases. However, with recognition that PRPs (1) still require an entity cost-effectively to “steward compliance” where major investments have been made, while (2) simultaneously seeking opportunities to develop a “consent decree-walk away-end game” solution, PNL has been interacting with PRPs and U.S. EPA Region 6 in the planning of a Long-term Site Management Entity. This month PNL hosted webinars on the topic with over 30 major companies participating. During 2019, PNL will continue to refine this new mature CERCLA site management system, further involving PRPs and EPA, while especially recognizing how many of the recommendations from EPA’s Superfund Task Force can be put into action via the proposed entity. Many of the “entity’s key factors” such as site title transfer, liability management, legal and regulatory compliance, and OM&M reporting, which could be managed via PNL’s Land Navigator, LLC. For more information on this topic please contact Marc Ferries in Houston at mferries@projectnavigator.com or 713-468-5995.

In this article, Genesis Energy, L.P.’s Kristi Unzicker and Project Navigator, Ltd.’s Bob Piniewski describe how, via collaborative effort of many stakeholders, and U.S. EPA certifying the site as “ready for reuse”, the former Tex Tin CERCLA site is presently functioning as a crude oil terminal. 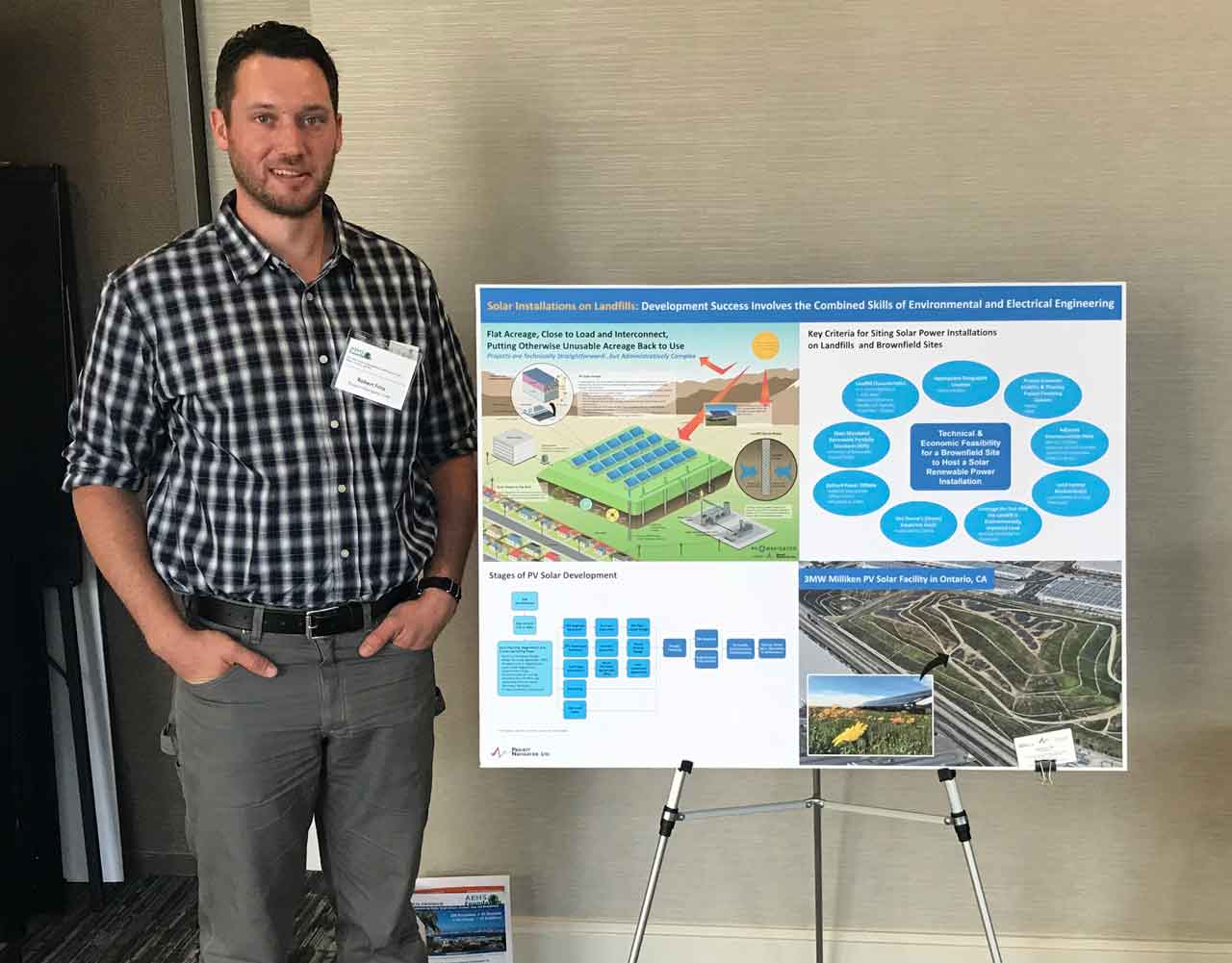 PNL works with our sister company TerraNavigator, LLC on the conception, planning and development of utility scale solar power projects on landfill sites. For example, see here, for a 3 MW, 15-acre, solar power project which PNL and TN planned, designed, permitted and constructed on the County of San Bernardino’s Milliken Landfill in Ontario, CA.

Our poster at the AEHS meeting highlighted the combination of skill sets (environmental, civil, and electrical engineering) which are required, and exist within PNL, to bring such projects to fruition. 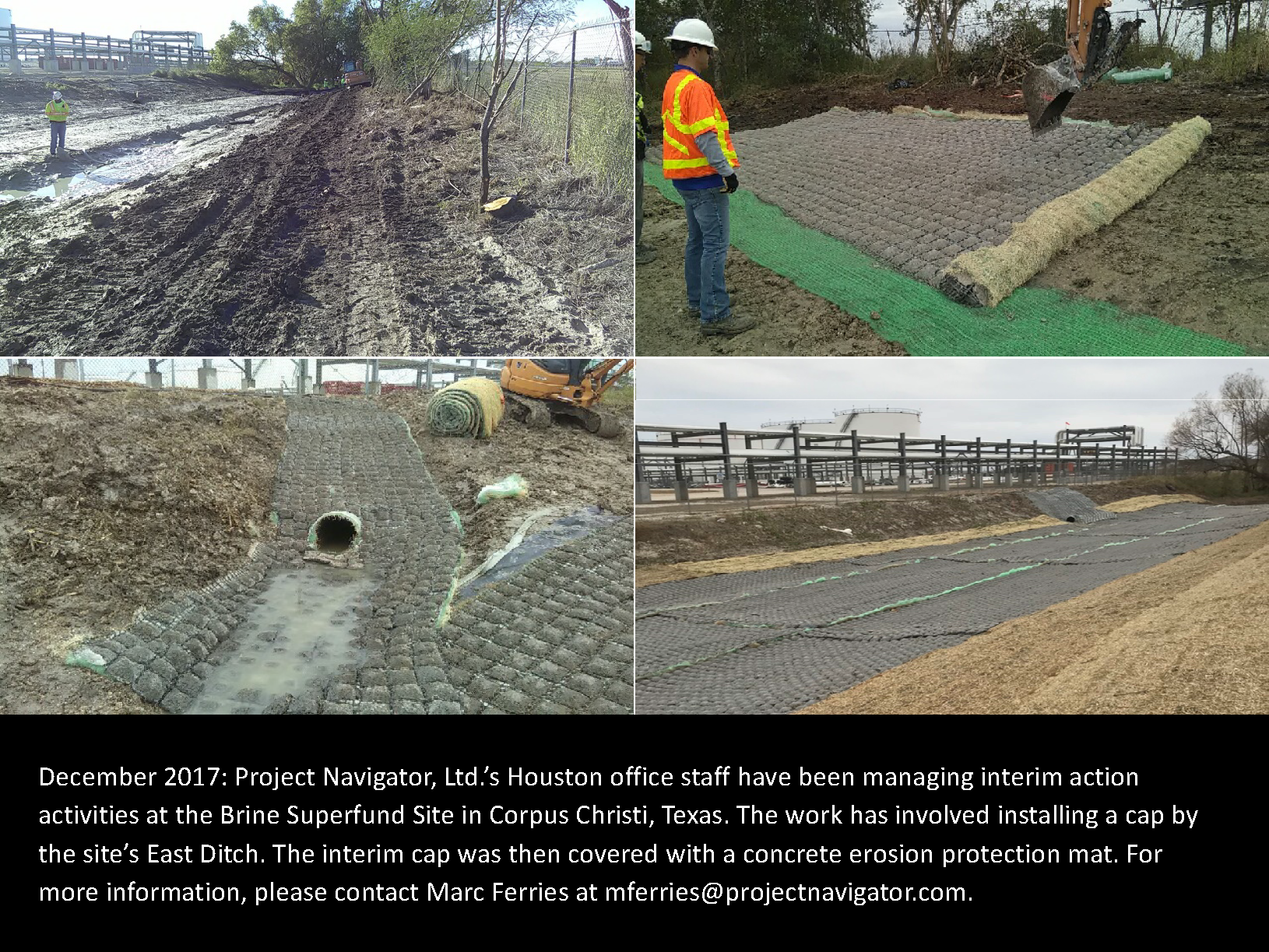 Project Navigator, Ltd.’s Houston office staff have been managing interim action activities at the Brine Superfund Site in Corpus Christi, Texas. The work has involved installing a cap by the site’s East Ditch. The interim cap was then covered with a concrete erosion protection mat. For more information, please contact Marc Ferries at mferries@projectnavigator.com. 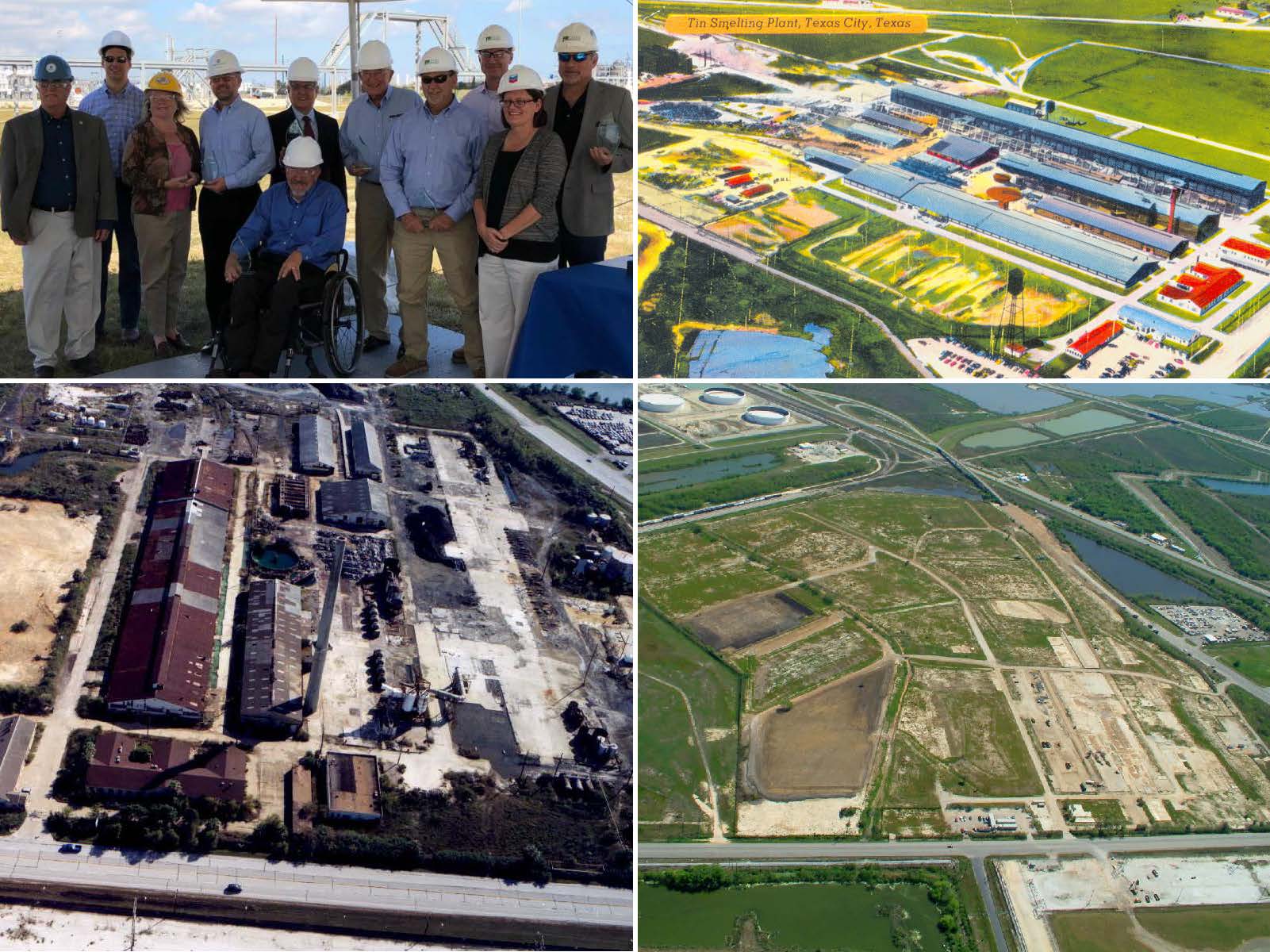 DALLAS – The U.S. Environmental Protection Agency (EPA) recognized stakeholders at the former Tex Tin Superfund site in Texas City, Texas, with EPA’s Excellence in Site Reuse award. The award recognizes Superfund site partners who have collaborated with EPA to support redeveloping Superfund sites in ways that are beneficial to the community and compatible with the cleanup. The former tin and copper smelter was placed on the National Priorities List of contaminated sites in 1998, and following extensive cleanup and monitoring is now being reused as a bulk oil storage and transfer facility.

“The Tex Tin site shows the benefits of stakeholders working together to make the most of formerly contaminated sites,” said Acting Regional Administrator Samuel Coleman. “Because of the efforts of these different groups, the site is now an active part of the Texas City economy.”

“At EPA’s behest, future development was included as a key consideration for the remedy at the Tex Tin Site. Future development served as a guiding principle throughout the design and successful implementation of the Tex Tin Site remediation, which culminated with construction of Genesis’s terminal; a great example of EPA’s goal of helping the community reclaim a former Superfund site,” said site steering committee co-chair Edgard Bertraut. “EPA, and later Genesis, worked cooperatively and diligently with the Tex Tin Steering Committee throughout the process of expedited remedy design, remedy implementation, and site redevelopment.”

The former Tex Tin site, on about 140 acres near Galveston Bay, operated as a tin and copper smelter from the beginning of World War II until the mid-1980s. Cleanup at the site addressed waste piles, wastewater treatment ponds, acid ponds and smelting-waste slag piles, and contamination in nearby Swan Lake Marsh and the surrounding ecosystem.

EPA has supported beneficial reuse at the site for many years. In 2001, EPA awarded a Superfund redevelopment grant to Texas City. In 2003, EPA issued the nation’s first Ready for Reuse determination for a Superfund site, which stated the site remedy would remain protective for industrial uses (as long as certain conditions were met). This determination gave potential developers assurance from EPA that the formerly contaminated site is clear for appropriate industrial reuse and redevelopment.

Redevelopment began in 2015, with coordination from EPA, other cleanup partners, and Genesis Energy, LP. to ensure the site remedy was protected during construction and future use. The formerly contaminated, abandoned site now employs several workers, supports local industry, and contributes to the Texas City economy. 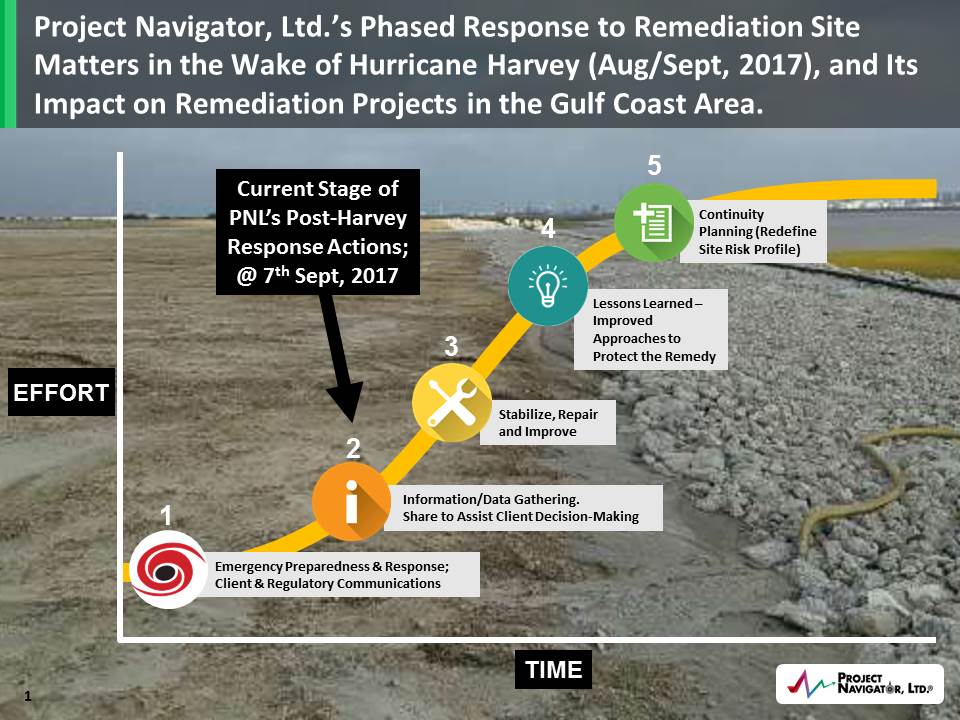 HOUSTON – Project Navigator, Ltd. manages remediation and response actions at several Superfund (CERCLA) sites in the Houston area. Since Harvey departed the Houston area during the week of September 3rd, PNL staff have accessed these sites, assessing conditions, and verifying continued remedy functionality. PNL has a series of well-planned storm response actions (see accompanying Figure), all of which were, and are, in action at our Houston CERCLA sites.

PNL provides Project Coordination and Construction Management services on behalf of the Malone Cooperating Parties for the Malone Service Company Superfund Site in Texas City, Texas. ENTACT is the EPA-approved General Contractor/Engineer, and Geosyntec has provided engineering services for the design of the RCRA Subtitle C Equivalent Landfill. The Remedial Action includes design/construction of a 30-acre RCRA Landfill to contain approximately 200K cubic yards of impacted soils and 285K cubic yards of solidified hydrocarbon based sludge. The Remedial Action is currently ongoing and approximately 80% complete with final completion expected in June of 2017. Once the Remedial Action is completed, PNL will continue to provide Project Coordination services and will oversee O&M activities, such as groundwater monitoring, leachate management/disposal, and maintenance of the 30-acre closed landfill.

The Ward Transformer Superfund Site Trustees have selected Project Navigator, Ltd. as their Project Coordinator responsible for overseeing, monitoring and coordinating all actions necessary to conduct the Phase II Removal Action as required by a 2005 Administrative Settlement Agreement and Order on Consent (“AOC”), and all actions necessary to conduct a supplemental RI and focused FS (“OU2”).

Past operations at the Ward Transformer Superfund Site included the repair and reconditioning of transformers, which today has resulted in PCBs impacts in both soils and adjacent streams. EPA Region 4 listed the site on the NPL in 2003. PNL shall be responsible for all budgeting, establishing assessment schedules, and general project administration to complete the work in a timely, cost efficient and effective manner.